The logic of 9/11: US-Saudi-Pakistani connections 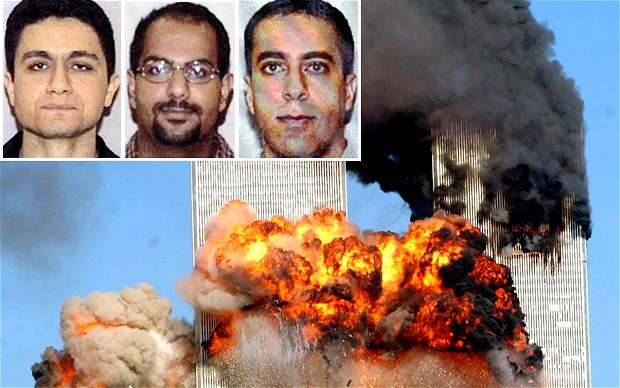 Last week, Congressmen Walter Jones and Stephen Lynch introduced a resolution urging President Obama to declassify the legendary “28 redacted pages of the Joint Intelligence Committee Inquiry of 9/11” issued in late 2002, which point to official Saudi involvement in 9/11. After much lobbying, and under an oath of secrecy, Jones was allowed to read the censored document: “I was absolutely shocked by what I read. What was so surprising was that those whom we thought we could trust really disappointed me,” he told IBTimes' Jamie Reno.

PNAC (Project for a New American Century) published a “grand strategy” in 2000 calling for the US to maintain its unrivaled superpower status, though this might require a “new Pearl Harbor” to justify launching preemptive wars against suspect nations. 9/11 happened as if on cue the next year, suggesting to many not so much a ‘grand strategy’ as a ‘grand conspiracy’.  As Bush told the 9/11 Commission, to justify invading Afghanistan and get Bin Laden, it was necessary to await “another attack on America”.

As the West invaded the Muslim world in the 19th–20th  cc, local Muslims naturally resisted the occupation—both physical and cultural—of their world. One can only admire the heroic resistance in Aceh (present-day Indonesia) to the Portuguese in the 16th century and Abd al-Qadir’s guerrilla movement against the French in Algeria in the 19th century. Even the Saudi tribe’s Wahhab-inspired resistance to the distant Ottoman court, already decadent and aping the imperialists, deserves respect, though the Saudi Bedouin were notorious for their cruelty and killing of captives. The PLO hijackings of the late 1960s–early 1970s (recall Leila Khaled) and the ongoing intifadas by Palestinian youth are classic jihad: individual duty (fard ayn) in defense of one’s home and religion, heroic and justified given Israeli aggression and unwillingness to negotiate the return of Palestinian lands.

From the 1970s, however, there arose a very different movement of resistance—terrorists, who use indiscriminate violence intended to provoke the imperialists and their local Muslim representatives into even greater repression, in the hope of sparking revolutionary war. They are the product of the imperial times, aping 19th European anarchists who threw bombs at monarchs, eventually launching WWI, and 20th century groups such as Baader Meinhof who robbed banks and bombed buildings to protest the Vietnam war. Now it was the humiliation of the Arab defeat by Israel in 1967, and the Soviet occupation of Afghanistan.

Most of the terrorists were/are understandably Saudis, rich on oil wealth, educated at western universities (or unemployed), and disgusted by the Saudi alliance with imperialism (and by implication, Israel). As such, these terrorists have been dubbed neo-Wahhabis by Seyyed Nasr, author of Islam in the Modern World: Challenged by the West, Threatened by Fundamentalism, Keeping Faith with Tradition (2010). They are the bitter fruits (for us all, Muslim and non-Muslim) now being reaped in the so-called Global War on Terror. The problem is that this ‘war’ targets all Islamists, including teenage Palestinian rock-throwers, Hizbullah resistance fighters, elected Hamas, Iranian and Egyptian politicians, conveniently lumping them all together with the neo-Wahhabi terrorists.

The culmination of this terrorism, the high point (or low point, depending on your point of view) is 9/11, though it is still not clear who carried it out and how. Officially, it was by 19 Arab youth (15 of them Saudi), operating under their al-Qaeda mentors (notably, Osama bin Laden, Khaled Sheikh Mohammed and Ramzi bin al-Shibh).

The 9/11 Commission Report has been widely criticized as having gaping holes and ignoring or suppressing important evidence. However, it carefully documents the movements of the 19 highjackers leading up to their suicide missions, and hard evidence pointing at real conspirators other than the 19 highjackers remains elusive.

Whistleblowers point to ignored FBI and CIA warnings, but this evidence, and memoirs by such as CIA head George Tenet and White House counterterrorism czar Richard Clarke, tend to undermine claims of wilful conspiracy by US government leaders.

The one clear thread from the start suggesting higher level involvement pointed not to US officials, but to Pakistani Inter-Services Intelligence Director General Mahmud Ahmed. He was ‘retired’ on 8 October 2001 by Pakistani dictator Pervez Musharraf, and the next day, The Times of India reported that, “US authorities [FBI] sought his removal after confirming the fact that $100,000 were wired to WTC hijacker Mohamed Atta from Pakistan [in fact, the UAE] by Ahmed Omar Sheikh at the insistence of General Mahmud”. He is now a missionary with the Tablighi Jamaat society.

Ahmed Omar Sheikh was arrested by Pakistani police in February 2002 for the Daniel Pearl kidnapping, sentenced to death, and has spent the subsequent 11 years incommunicado. Pakistan refuses to extradite him to the US.

The legendary “28 redacted pages” have been the object of attention ever since they were redacted. In 2003, 46 senators demanded that Bush declassify them. Ex-Senator Bob Graham, who chaired the Joint Inquiry in 2002, told IBTimes: “The Saudi government without question was supporting the hijackers who lived in San Diego. You can’t have 19 people living in the United States for, in some cases, almost two years, taking flight lessons and other preparations, without someone paying for it. But I think it goes much broader than that. The agencies from CIA and FBI have suppressed that information so American people don’t have the facts.”

Two of the Saudi men in question are Omar al-Bayoumi and Osama Basnan. Bayoumi worked for the Saudi Ministry of Defense and Aviation, moved to the US in 1994, and in 2000—after a visit to the Saudi Consulate in Los Angeles—invited two of the hijackers, Khalid al-Mihdhar and Nawaf al-Hazmi, to San Diego. Bayoumi found the two future hijackers an apartment and paid their first and last months rent ($1,500). Bayoumi left the US in July 2001, was briefly interviewed in Britain by the FBI after 9/11, but released and never brought back to the US for questioning.

As for Basnan, Newsweek reported that he received $73,000 over several years from Princess Haifa, wife of Saudi US ambassador Prince Bandar (now Saudi intelligence chief). Basnan apparently took over Bayoumi’s responsibilities with the highjackers—whatever they were—but remained at large after 9/11, was never questioned, and was finally deported to Saudi Arabia in November 2002 on a visa-violation charge.

Abdussattar Shaikh, a long-time FBI asset in San Diego, was friends with Bayoumi and invited two of the San Diego-based hijackers to live in his house, but seems to have been unaware of what was really happening. He was not allowed to testify before the 2002 Joint Inquiry or the 9/11 Commission.

Then there is the Floridian Saudi millionaire Abdulaziz al-Hijji. The Hijji family fled their Sarasota mansion and the country just weeks before 9/11, leaving behind three luxury cars, clothing, furniture and fresh food in the frig. The gated community’s visitor logs and photos of car license tags showed that future 9/11 hijackers Mohamed Atta, Marwan al-Shehhi, Walid al-Shehri and Ziad Jarrah visited the Hijji home, which was only a few miles from their flight school. Abdulaziz returned to wrap up his affairs in 2005 but was not detained or questioned.

Yet more evidence pointing to Saudi involvement is related by Gerald Posner in Why America Slept: The Failure to Prevent 9/11 (2003), based on testimony by Abu Zubaydah, #3 on the US list of terrorists, a Saudi who was arrested 2002 in Pakistan and handed over to the US. He was duped by US interrogators masquerading as Saudis, injected with sodium pentathol (truth serum), and told his interrogators that he was “relieved” to find he was being quizzed by Saudis, providing them with phone numbers for a senior member of the Saudi royal family who would “tell you what to do.” The numbers were traced to Prince Ahmed bin Salman bin Abdulaziz, a nephew of King Fahd. He revealed more details of Saudi and Pakistani ties to Bin Laden, which the CIA passed on to the related governments.

The Saudi connection ran through the then intelligence chief Prince Turki al-Faisal bin Abdulaziz, who agreed to let Bin Laden leave Saudi Arabia in 1991 and to provide him with secret funds as long as al-Qaeda refrained from promoting jihad in the kingdom. Clearly the Saudi leadership feared/ respected/ encouraged Bin Laden in his self-styled jihad as long as he left the them alone, as he was merely doing what they should have been doing as followers of Wahhab. In Ghost Wars: The Secret History of the CIA, Afghanistan, and Bin Laden, from the Soviet Invasion to September 10, 2001 (2004), Steve Coll writes that the CIA realized and admited this.

In the space of one week in July 2002, three of the four persons named by Zubaydah were dead:

There is sharp criticism in the 9/11 Commission Report of the Pentagon, CIA, FBI and Federal Aviation Administration for blatant lying and obstruction, though it seems that they were more concerned with covering up their incompetence, their refusal to share vital information, and the fact that their agents among the conspirators were really double agents. Bayoumi and Basnan may even have been triple agents, working for the FBI, the Saudis and al-Qaeda.

Ahmed Omar Sheikh seems to have been another (much more hands-on) triple agent, working with MI6, ISI and al-Qaeda. In his memoirs In the Line of Fire (2006), Pakistani dictator Pervez Musharraf said, “At some point, he probably became a rogue or double agent.” Ha, ha. We will never know exactly who Omar Sheikh was working for, as he will most likely die in Pakistani custody, just as the US government preferred to kill Bin Laden rather than to capture him alive.

Whether or not the legendary 28 redacted pages are made public, the pieces of the puzzle are falling into place. Pakistan’s ISI and rogue (?) Saudis were directly involved in planning and financing 9/11.

The idea was/is a Saudi-led hegemony in the Muslim world, where Pakistan would preside in Central Asia. The Pentagon, CIA and FBI lied to 9/11 Commission, not only to protect their links to their own duplicitous agents, but—more importantly—to prevent the whole Saudi/ Pakistani/ US alliance from collapsing in a real Islamic revolution, a la Iran. (This is what was beginning to happen with the rise to power of the Muslim Brotherhood in Egypt, which the Saudis sabotaged with US support.)

The US State Department was encouraging Unocal in its Afghan gas fantasy right up until 2001, gambling that the Taliban would  bow to Saudi-Pakistani pressure to conform to this “grand strategy”. But the US, by undermining Afghan society in the 1980s using Islam’s Baader Meinhofs, had created a vacuum, a breeding ground for further terrorism. Hence, the dilemma: either the Taliban would have to buckle or the US would have to invade Afghanistan (and anywhere else it deemed a terrorist haven) after a “new Pearl Harbor”.

CIA head Tenet and Richard Clarke both supported Bush’s pre-9/11 plan to invade Afghanistan, and were just waiting for the go-ahead. In a White House memo a week before 9/11, Clarke wrote that he could not understand, “why we continue to allow the existence of large-scale al-Qaeda bases where we know people are being trained to kill Americans. You are left waiting for the big attack, with lots of casualties, after which some major US retaliation will be in order.”

9/11 skeptics call this scenario LHOP (let it happen on purpose). Whether it was 100% LHOP or 50% LHOP, it just required letting the logic of history take its course.

A version of this appeared at Presstv