A new Bermuda Triangle has been spotted, but this one is in the eastern Mediterranean -- between Turkey, Cyprus and Israel, observes Eric Walberg

Turkey’s foreign policy shift is now in full gear. Having kicked out the Israeli ambassador and rejected the UN Palmer Report, Turkish Foreign Minister Ahmet Davutoglu says that Turkey plans to take its case against Israel’s blockade of Gaza to the International Court of Justice, not alone, but with the support of the Arab League, the Organization of Islamic Cooperation and the African Union. “The process will probably reach a certain point in October and we will make our application.”

Israel’s refusal to say “I apologise” has already proved to be very expensive, and will continue to reverberate, not just in the hollow halls of the ICC, but off the shores of Israel itself, as Turkish warships accompany flotillas breaking the siege, and when Turkey begins drilling for gas in waters that Greek Cyprus and Israel have their eyes on. It will echo when Turkish Prime Minister Recep Tayyip Erdogan, who US International Trade Undersecretary Francisco Sanchez said was “like a rock star”, crosses the Rafah border to visit Gaza. No one can mistake Israeli Prime Minister Benjamin Netanyahu or Cypriot President Dimitris Christofias for Elton John.

Palestine’s move to become an independent state has benefitted from the growing BDS movement, as the world wakes up the enormous and unjust suffering of the Palestinian people, writes Eric Walberg

A new Boycott, Divest and Sanctions (BDS) campaign was launched this summer by the United Church of Canada, which will try to persuade six companies operating in Canada — Caterpillar, Motorola, Ahava, Veolia, Elbit Systems and Chapters/Indigo — to stop supporting the Israeli occupation. “The Campaign follows similar campaigns launched some time ago by the US Presbyterian Church and the New England Conference of the United Methodist Church. We have launched ‘Occupied with Peace’ after almost two years of discernment and information gathering,” says spokesperson Jean Lee.

Pakistan vs the US: Moving on

The latest Mumbai bombings were not obviously the work of Pakistani extremists, but reflect the unrest thanks to America’s continued reckless policies of escalation in the region, notes Eric Walberg

India has shown admirable restraint, refusing to accuse its Western neighbour following the triple bombing in India’s financial capital Mumbai last week which killed 19 people and injured 129. The area targetted, with its gem and precious-metal traders, witnessed bombings in 1993, 2004 and 2006, culminating in the November 2008 siege of Mumbai, in which 166 people died.

Freedom Flotilla 2: To Gaza with Dignity

The drama now playing out on the high seas has captured the world’s hearts‭, ‬says‭ ‬Eric Walberg 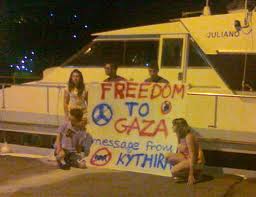 Turkey vs the US: A kinder Middle East hegemon

Is Turkey's new regional assertiveness yet another case of "the tail wagging the dog", wonders Eric Walberg

Turkey's foreign policy has changed dramatically since the collapse of the Soviet Union and the unrivalled ascendance of the US, Turkey's principal ally since its founding as a republic in 1923. Formerly, it acted as a proxy for US power in the region. As a member of NATO since 1952, it was a strategic Cold War foe of the Soviet Union. Turkey was the second Muslim nation (after Iran) to recognise Israel soon after it declared itself an independent state in 1948, and maintained close political and economic ties with that key Middle East ally of the US through thick and thin. Turkey was encouraged by the US to move into ex-Soviet Central Asia as it opened up after the collapse of the Soviet Union, with the goal of co-opting the Turkic-speaking "stans", bringing them into the Western fold by appealing to their Turkic heritage.