Saudi duplicity is backfiring royally. The architect of Abdullah’s worst foreign policies Tuwaijri is gone, but does Abdullah’s successor Salman bin Abdulaziz al-Saud have the guts to face Saudi Arabia’s many nightmares?

The death of King Abdullah in January 2015 confirmed the contradictions at work in Saudi politics. The architect of Abdullah's destructive policies, President of the Royal Court Khalid al-Tuwaijri, was immediately dismissed, replace by Prince Muqrin. Tuwaijri was the key player in foreign intrigues—to subvert the Egyptian revolution, to send in the troops to crush the uprising in Bahrain, to finance ISIL in Syria in the early stages of the civil war along his previous ‘ally’ Prince Bandar bin Sultan.

As Abdullah lay dying, the Zaidi Shia Houthis in Yemen were occupying the presidential palace in Sana, a plan plotted by former Yemeni dictator Saleh and the United Arab Emirates (Saudi allies), keen to undermine the democratic transformation of Yemen that Islah, the Yemeni Muslim Brotherhood, was trying to effect.

The entire focus of Abdullah’s foreign policy after 2011 was to stop the Arab spring in its tracks in Tunisia and Egypt, bribe their leaders with Saudi billions, and crush all forces capable of mounting an effective opposition in the Gulf States. Everything else, including the rise of Saudi's foremost regional rival Iran, became subservient to that paramount aim to crush democratic political Islam.

The Yemen plan backfired when Islah refused the bait to take up arms to resist the Houthi advance. As a result, the Houthis took more control than they were expected to, and Yemen now looks like Syria in reverse. Al-Qaeda's claim to be the only fighters prepared to defend Sunni tribesmen, has just been given a major boost.

The elephant in the room here is Iran. Why are the Saudis sooo hostile to Iran? Iran has never publically called for their overthrow. It has made countless offers of dialogue over many long decades. It's more a question of the Saudis trying to use Sunni-Shia sectarianism to hide their irrelevance to the Muslim world (and the world at large)

What they fear is the example the Iranians provide. Their relevance to the Muslim world, despite the Shia-Sunni differences, continues to grow. The thought of a ‘Shia crescent’ terrifies the Saudis, not because it means war or some apocalypse, but because it would lead to a stable Afghanistan, Iraq and Iran. Did I hear you mention Pakistan? It too would also be revealed as irrelevant to the region’s peace if Iran were let back in the fold.

When the US figures this out, the days of the Saudi dictatorship/ monarchy will be numbered. Iran will take its place as the more reliable, sensible—Islamic—state in the region, the only state not afraid of genuine democracy.

The Shia revolution in Iran had echoes in the Sunni world from the start in 1979. It inspired a young Egyptian Muslim Brother, Essam el-Erian (now imprisoned Freedom and Justice Party vice-chairman and MP), to say at that time, “Young people believe Islam is the solution to the ills in society after the failure of western democracy, socialism and communism to address the political and socio-economic difficulties.” It prompted Saudi rebels to occupy the Kaaba that same year in an attempt to spark revolution, Syrian Islamists to rise against their secular dictator Hafez al-Assad in 1980, and future al-Qaeda leader Ayman Zawahiri to conspire to assassinate Egyptian president Sadat in 1981.

Most of the terrorists (those implicated in the 9/11 hijackings, the foreign fighters in Afghanistan in the 1980s and now in Syria/ Iraq) were/are understandably disaffected Saudis, rich on oil wealth, educated at western universities (or unemployed), yet disgusted by the Saudi alliance with imperialism (and by implication, with Israel) that was blessed by the Wahhabi establishment—so-called neo-Wahhabis. They found allies in their Pakistani brothers, betrayed, first, at ‘independence’ when the British handed Muslim Kashmir over to India, and then again when Reagan declared ‘victory’ over the Evil (Soviet) Empire in 1990 and decided they were really terrorists after all.

CIA analysts coined a term for this type of counterproductive outcome resulting from attempts to manipulate political developments—“blowback”—in its internal analysis of its own orchestration of the 1953 coup in Iran, warning of future anti-Americanism as a result of the coup. The neo-Wahhabis provide another, even more serious instance of blowback, where the revolutionaries, angry with Muslim official complicity with imperialism, started using strategies of revolution and the arms of the imperialists against both the US and their own leaders and peoples.

They are the bitter fruits (for us all, Muslim and non-Muslim) now being reaped in the so-called Global War on Terror, which targets all Islamists, lumping together genuine terrorists, teenage Palestinian rock-throwers, Hizbullah resistance fighters, and elected Hamas, Iranian and Egyptian politicians.

Egypt was a ray of hope

Like the Iranians, the Egyptian Muslim Brotherhood tried hard to square the circle with the Saudis but Saudi chauvinism trumps belief. The willingness of the Saudis to sacrifice thousands of Egyptian Muslims is shocking, though not out of character. Remember the1979 seige of Mecca by French Special Forces, who killed hundreds, possible some of the same 'Spetsnaz' who are murdering Muslims on the streets of France today.

Foreign relations under Egypt’s MB were shifting towards a more confrontational stance with Israel, defying Israel on Gaza, and moving towards more cooperation with other Islamic governments and movements, in particular Iran, but also throughout the Muslim world, while avoiding any open challenge to the Saudi monarchy. 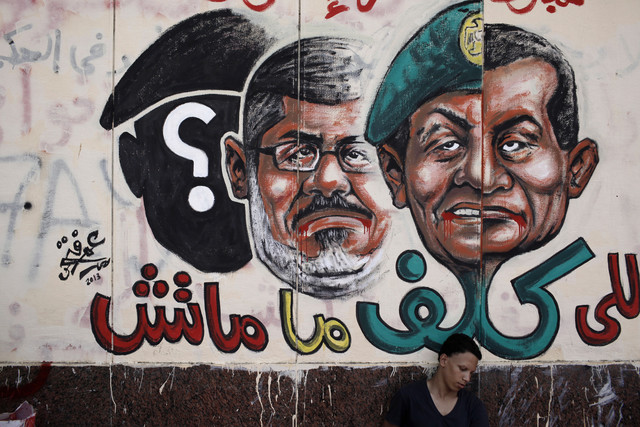 President Mohamed Morsi was not oblivious to Saudi concerns. He made no sudden overtures to Iran. His first stop was Saudi Arabia, which initially promised support. The Morsi government delayed and delayed on the ‘generous’ IMF loan, finally proposing a compromise that included a demand to cancel part of what it termed the ‘odious debt’ from Mubarak years—which it was. The Islamists’ constitution—accepted by a popular vote, but post-coup replaced by another authorized by the military—put the family squarely at its heart, confirming both individual rights regardless of belief, status or ethnicity, and responsibilities.
These tantalizing developments confirm the validity of the MB strategy of confronting imperialism, coincidentally exposing the venality of the Saudis. All the sweet words of Morsi fell on deaf ears.

Guardian of the Holy Places

So do the Saudis at least protect the holy places? Ninety percent of pre-twentieth century architecture in Mecca and Medina has been razed, with more to come. According to the Washington-based Gulf Institute. Saudi authorities maintain they have the sole right to decide what should happen to the historic sites in Medina and Mecca.

In 1925, they leveled the cemeteries in Medina (where the Prophet’s grandson Hasan and Imam Jafar al-Sadiq are buried), and Mecca (where the Prophet’s grandfather and other ancestors are buried). They built the 600m tall Abraj al-Bait (Royal Hotel Clock Tower, second tallest building in the world after the Dubai Khalifa tower) beside the holy mosque of Mecca. It houses luxury hotels and apartments and is located on a five-storey shopping mall, where the Ottoman Ajyad fortress (1781) once stood, built to defend Mecca from Bedouin bandits like the Saudis.

Currently, as part of their plans to turn the Masjid al-Nabawi in Medina into the world’s largest building (capacity 1.6 million), they are threatening to destroy the thirteenth century green dome which holds the tombs of the Prophet, Abu Bakr and Umar, mosques dedicated to Abu Bakr and Umar, and the Masjid Ghamama, built to mark the spot where the Prophet gave his first prayers for the Eid festival. The Saudis have announced no plans to preserve or move the three mosques, which have existed since the seventh century and are covered by Ottoman-era structures. A pamphlet published in 2007 by the Ministry of Islamic Affairs, and endorsed by Grand Mufti of Saudi Arabia Abdulaziz al-Sheikh, called for the dome to be demolished and the graves of Muhammad, Abu Bakr and Umar to be flattened.

There is surely a tidal wave of anger and despair among all Muslims over this betrayal of Islam, including  among Saudis. We can only shudder as the slow motion train wreck proceeds.